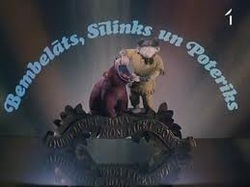 _
Although Latvia was part of the USSR until 1991, its animation filmmaking is quite new. The first puppet films were made in 1966, and first cut-out films in 1969. During Soviet times there were two studios that made animation films: Puppet Film Studio and Film Shooting Group who made animation for TV.

At that time, Latvia was consistently producing 2-3 films a year.

Now, the country has another six or more studios. One is a very large organisation that makes a lot of animation for France. Some smaller groups make work for Scandinavian countries. Small independent studios make their own artistic films using different techniques from handmade puppet films, cut-outs, computer animations, 2D, 3D, and finally, painting under the camera.

Despite the obvious creativity in Latvia's animation industry, the country is lacking trainers and formal learning opportunities in this field. Most students have had to travel to Tallinn in Estonia to learn the trade,s though the Art Faculty in Latvia began to teach animation only since last year. Despite these challenges, those who do become animators have a positive outlook believing that if they have the will to succeed, they will find work, find funds or make partnerships to help them bring their animation projects to fruition.

"Fairytale sitting on the threshold"